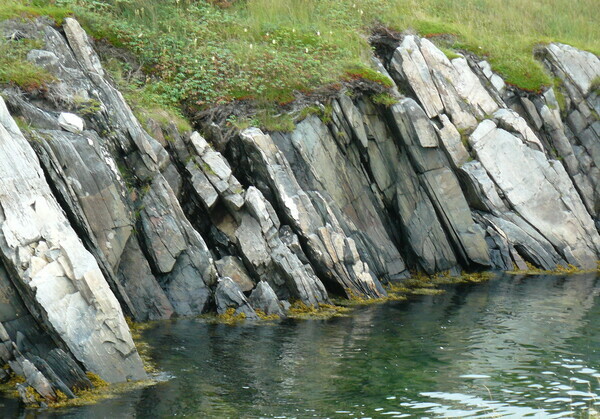 ROCKS IN MY HEAD: resilience, renewal and regeneration

I returned from a trip to Newfoundland with a disproportionate number of photographs of rocks and with small stones nestled among my clothes causing my luggage to be slightly overweight. Rocks are elemental, primal. They have always resonated as powerful symbols of the passage of time and the process of transformation. Strata that were once horizontal have completely changed orientation and are now vertical . . . and constantly shifting.

The drawings in this body of work are all inspired by small found stones that have drawn attention to themselves by revealing an interesting fossil, shape (foot rock), pattern or some other remarkable feature.

The works in these series celebrate the results created by dramatic natural processes such as floods, volcanoes and ice ages presented along with some of the possible explorations and alterations produced by art making processes. Often whimsically presenting my own version of transformation while providing evidence of the original source material.

I love working on paper. I am constantly amazed (and relieved) by how much adding, removing, scratching and rubbing paper can handle. The paper's surface is never very far away because it will hold very few layers of drawing media simultaneously. There always remains a kind of stain or memory – even after previous incarnations have been removed – unlike a painted surface which can be covered and then covered again.

The band rock drawings, clay sculptures and cast plaster reliefs tell the story of a small, five-sided stone with a crystalline band running through it. Whimsically navigating the seasons by colour, pattern and mood, this tiny and ancient piece of the planet tries on rivers and mountains and morphs into melting icebergs and spring suns. Band rock inhabits summer flowers and autumn leaves and provides a birthplace for small trees. Micro becomes macro, rock-hard transforms into petal-soft.

The work playfully makes apparent a relationship between nature's ancient patterns in earth and water and the iconic designs that came into fashion during the transformative 60s and 70s - a period in the relatively recent past. I acknowledge and appreciate the work of many artists of that creative time, particularly Maija Isola and Gunila Axen, whose designs I have borrowed and manipulated. Contrasting the organic with the ordered, the random with the repetitious, each piece also incorporates layers of paper and drafting film that have been stitched to the paper ground - creating visual and symbolic depth.

The band rock series is an exploration in seeing the intimate interconnection between the parts and the whole, in seeing how the pieces fit together - even at different scales and in unexpected combinations. Viewing a small rock through the lens of imagining a larger relational context, the artworks in this series are playfully celebratory and quietly reverent.

How one face of a rock came to be so dramatically different from its other side remains a mystery - in spite of geology's accounting for some of the many forces responsible for these alterations. That many of the found stone specimens in my care have been on-the-road to now for millions of years is a mind-stretching realization. And just as the marks and scars on an aging human body tell something of its journey, the rocks' inlays, imprints and remnants of long-ago life forms allude to a wondrous and complex narrative of how the earth formed. These small stones hold secrets, memory and wisdom. They are the ground.

The title before and after also references notions about representation by toying with scale and by contrasting over-sized realistic renderings of both sides of the same stone with patterns created by playfully configuring shapes of the actual-sized rocks.

Found somewhere along the shores of Lake Ontario, this tiny piece of the planet reveals an ancient fossil in the shape of an arrowhead. The pattern within the arrowhead - clearly transformed from the original life form - identifies itself even when only part of it is drawn. The drawings in this series employ a process of deconstructing the rock into its component parts and then putting it all back together in new configurations: for example, patterns evolve using the three shapes that represent the three sides surrounding the face of this triangular rock - these are the facets that give the stone depth, that make it three-dimensional. The drawn-size of the shapes matches exactly the rock's actual size.